It supposed to be a Swiss dream no.2 but instead was a Czech disaster and in the end Polish salvation.

I guess not everywhere is a piece of home or even hospitality… or even… ok we actually ate good. And the room we slept in had a nice window.

So we left Switzerland in the evening. Went with the car over the night to Prague. You know… or don’t but Prague is said to be a nice, cultural city. The most important was just not to drive all the way to Poland in one piece. So like 12 hours plus breaks..

NOT a good idea.

We were robbed quite painfully because those schmucks (shame on them) broke two windows in our car. Not that the car was in the city center… ok almost because obviously Czechs don’t allow to park in the city center if you are not Czech…Blue lines means: only for Czech.

We left the car, closed it and made sure that we don’t need to pay. We went on. Prague itself is nice but the service…actually in every place we’ve visited was 1/10.
1 for the attendance.

Previously I had a better opinion about Prague. Maybe not 10/10 but..

Then we came to the car back. And it has started…
I must be here colloquial.
Two police officers waiting next to the car. Those guys had no idea. NOT ANY… Then we waited…and waited… and came another two.. they had a photo camera at least. Then we waited. Then we went to the police station. Then we waited. Then there was a most incompetent translator in the world. Man, she was worse than me when I was still at A2 level of German. Then she screams something in Czech. Then she offended me in German. Then J Man said that we actually didn’t do anything…maybe she had mistaken us with the thieves. Then one police officer offered us water from an old coffee machine and if we can’t find water there then we can just take it from the toilette. That is just a short summary.

Fortunately we were on our way to Poland. And the mountains were a real paradise.
(Ps. I must finally wrote something about Poland…like a real post..)

We still felt the aftermath of Czech-one-day-trip like repairing the windows..even on the way to the service we’ve bumped into another car but only slightly and this car was like falling apart, they took 50 bucks and we said goodbye. Finally we’ve made it to the mountains and it rained heavily… 🙂 I must say, rain for me has some magic. You can sit inside of the shelter and drink some tea or just be happy that You don’t go back another 2 hours in this rain. So we went up the mountains and pushed hard forward… I think very deep inside J Man wanted only to sit down on the rock and not follow me up.. But we both made it.. And this weather means no season, which means very little people, which means.. chamois 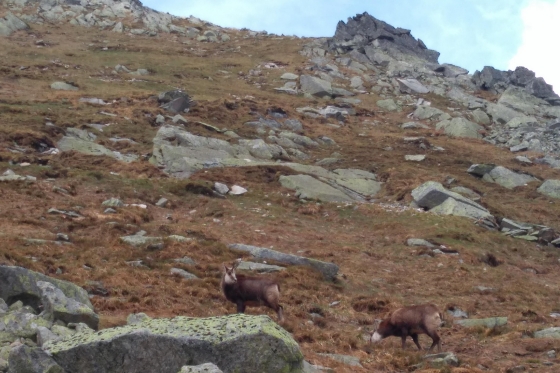 and marmots. But it also means marmots make babies so on the route we wanted to take was  “please do not disturb”.

we could use some spikes..

… not funny wenn You have an hour behind You and an hour ahead to compass. And no signal… Even more unfortunate when it’s after winter and they are hungry and also the mama bear can be with a kids bear rollin in the woods. Well we didn’t feel our feet anymore but in this moment the adrenaline rush was so big that we ran down the path and in the end that was just footprints. I googled “meeting with a bear” and it said they see us more often than we see them… Stockers..

I don’t know in which category I could put this post.. warning, trip, or whatever but for sure be careful and don’t owe a car with Swiss numbers because thieves think You have tones of gold inside…